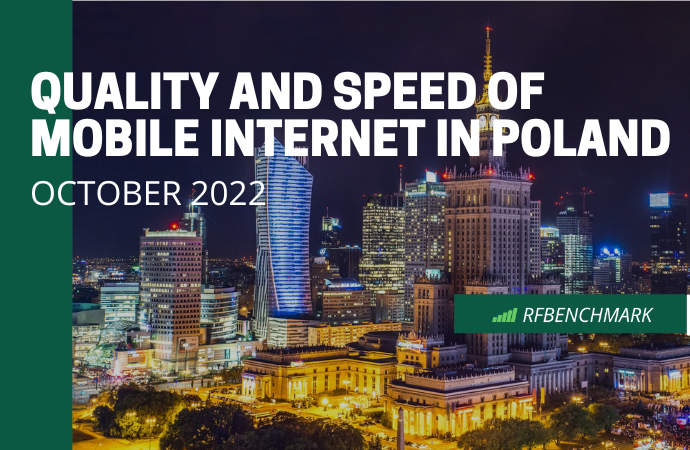 Autumn has set in for good around here. The last multicoloured leaves are shimmering on the trees and the pavements are increasingly dotted with puddles. Today, we will present another ranking to see how the mobile Internet market in Poland is shaping up in October 2022.

In October, we recorded 151,929 measurements. We collected the data courtesy of and with the involvement of our RFBENCHMARK app users. Once again, the number of measurements increased significantly compared to the previous month. The tests were mostly performed using LTE technology (95.11%). Less than 5% of users used WCDMA (4.89%).

Mobile Internet in Poland – What was the situation like in September 2022?

The first month of autumn didn’t bring us any changes in the ranking. T-Mobile was unrivalled in terms of the average data download speed results (39.7 Mbps). This operator clearly surpassed Orange (38 Mbps), which came second in the ranking.

In other categories, there were no shifts in the table either. In terms of the average data upload speed, Play was the best operator (20.1 Mbps), followed by Orange (19 Mbps) and T-Mobile (17.8 Mbps).

In terms of the lowest average ping value, Orange (29.3 ms) was the highest-scoring operator, with a result better by 1 ms than that of Play.

Mobile Internet in Poland – What was the situation like in October 2022?

For another month in a row, T-Mobile was the best operator in terms of the average data download speed of LTE. With a result of 39.4 Mbps, it overtook Orange (35.8 Mbps) and Play (32.9 Mbps). The leader’s advantage increased, mainly due to Orange’s much worse result compared to September. Plus ranked fourth (26.7 Mbps).

Play continues to top the table in the average data upload speed of LTE category. The operator achieved a result of 20.7 Mbps. The other positions on the podium were awarded to Orange (19 Mbps) and T-Mobile (18.4 Mbps). The weakest result was recorded by Plus (17 Mbps).

The biggest change in our recent ranking happened in the category of the lowest ping value of LTE. In October, Play (29.7 ms) overtook the previous leader, Orange (30.2 ms), and claimed a valuable victory. Bronze in this category went to T-Mobile (32 ms), while Plus (36.4 ms) came in last place once again.

The measurements are collected from the users of our mobile app. It allows us to measure basic mobile network parameters – including signal level and quality depending on the technology used by the mobile device, information about the mobile network operator, or the country where the smartphone is located. In addition, on-demand measurements of data download and upload speeds, as well as a latency test, are performed.

When the app notices a low-quality voice call, lack of mobile Internet service, or other services, it has the ability to report the user’s current position where the problem occurred.

Help us create the report on the quality and speed of mobile Internet in Poland!

Download our mobile app for free and join the community!