Quality and speed of mobile Internet in Europe – RFBENCHMARK (2019) 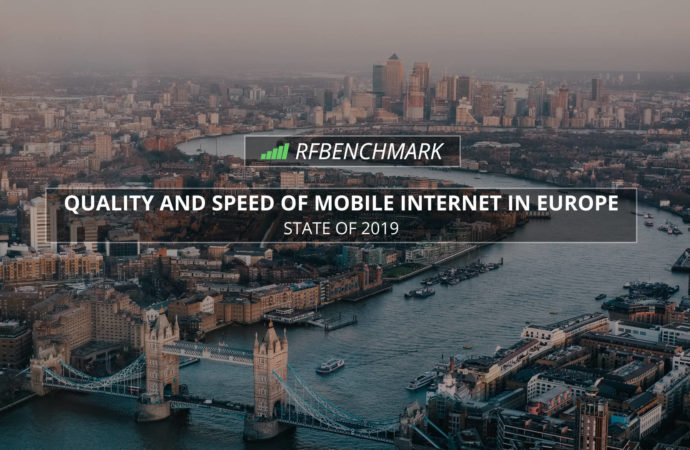 Last week, we published a grand summary of mobile Internet in Poland in 2019. Today it is time to summarise the development of mobile services in Europe.

On the Old Continent, as in other parts of the world, intensive preparations and first implementations of commercial networks based on 5G technology are underway. Have the investments had a positive impact on the mobile Internet speed results?

On the basis of measurements of RFBENCHMARK application users, we have prepared a report that will help us answer this question and get an idea of the situation in Europe.

Mobile Internet in Europe – what did the ranking look like in 2018?

Among the countries that could enjoy the best Internet in 2018 are France, Austria, Spain, the Netherlands, and several others (including the Baltic States and Scandinavian countries).

Throughout 2018, France triumphed in the average data download speed category. By the Seine, average results throughout the year ranged between 20.3 Mbps and 20.8 Mbps, enough for France to be unrivalled in this category.

We observed a higher rotation in the average data upload speed and the lowest ping value categories. In the first ranking, the Austrians won twice (Q1 and Q2 2018), the Netherlands was victorious once, and at the end of the year, the trophy went to one of the countries on the Iberian Peninsula – Spain.

In turn, the lowest ping value proved to be the domain of countries from the North. In the first and second quarter, Finland was at the head of the table, and in the second half of 2018, the neighbouring countries of Lithuania and Latvia were ranked the highest. It is worth noting that Estonia was at the forefront of the rankings throughout the whole year.

Mobile Internet in Europe (2019) – in which countries is it the fastest?

France has maintained a good course and tops the 2019 annual ranking in the average data download speed category. This is thanks to the result of 19.9 Mbps. Austria came second with a slightly worse result (19.8 Mbps), and Portugal came third (19.3 Mbps).

Poland was just behind the podium and came within an inch of the top three (19.2 Mbps).

Unsurprisingly, Ukraine was on the other end of the spectrum and was the only country to have scored less than 10 Mbps. Internet users in Macedonia (10.4 Mbps) and Russia (11.5 Mbps) were in a slightly better position. It might be comforting to hear that mobile Internet in these countries is speeding up in comparison with previous rankings.

There were no changes either in the average data upload speed category. In the top three, we have good old friends – Spain, Austria, and the Netherlands. Spain won (10.3 Mbps), but the differences between particular countries (Austria – 10.2 Mbps, the Netherlands – 10.1 Mbps) are truly minimal.

On the other side of the barricade, we have Ukraine (3.4 Mbps) and Macedonia (3.5 Mbps) once again. They were kept company by the citizens of Azerbaijan who could upload data at an average speed of 4.8 Mbps.

Geographical regularities continue in this category. When it comes to the countries with the lowest ping value, Latvia was at the top of the list with a score of 59 ms, overtaking Norway (61 ms) and the United Kingdom (62 ms). The other Baltic states were just behind the top three – Estonia and Lithuania achieved the exact same result (63 ms).

Mobile Internet in Poland – how do we fare compared with the rest of Europe?

It is interesting to look at the results regarding Poland through the prism of the achievements of other European countries. Poland was very close to advancing to the top three in the average data download speed category and, although it did not perform as well in other categories, it maintained good standards.

As far as the average data upload speed is concerned, Polish mobile Internet users could enjoy a decent speed of 8.5 Mbps. This is a relatively good result when we look at the achievements of its neighbouring countries (Germany – 7.9 Mbps, Czech Republic – 8.1 Mbps, Slovakia – 7.5 Mbps).

Also in the lowest ping value category, Poland joined a rather elite group with a result of 69 ms. Once again, it turned out to be better than in Germany (71 ms), and the same result was also recorded in Belgium, the Netherlands, and Ireland.

Most important data from 2019

Join our Community! Check Radio Coverage and Internet Quality in Your Neighborhood!!