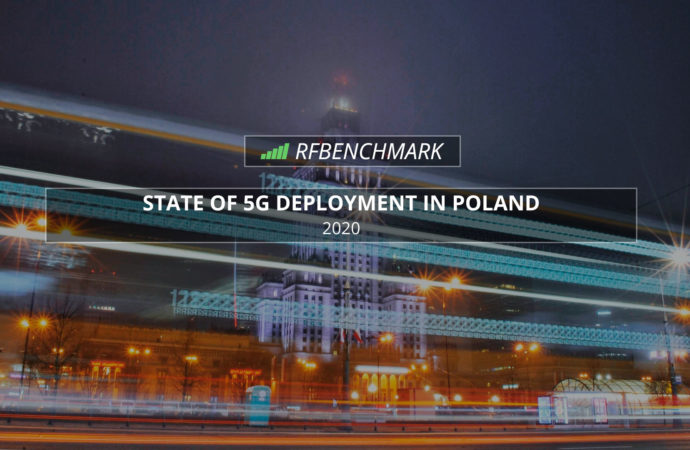 2020 was supposed to be the beginning of the long-awaited 5G era. Further commercial deployments were to electrify not only telecommunications enthusiasts, but above all ordinary people. Thanks to the access to modern technology, they were to reap many benefits. Yet, things took a totally different turn. Due to the ongoing pandemic, information on the progress of work on the next-generation network was lost in a flurry of other messages. However, the 5G implementation was in motion, which made the whole project take real shape. Notel Poland specialists decided to check the current implementation status of the much-coveted 5G network in Poland.

In early November, a group of specialists conducted a drive test. On the basis of the measurements collected in three cities (Warsaw, Łódź, and Wrocław), they prepared a report which provides valuable information on the status of 5G deployment in Poland.

What is 5G technology?

Many legends have grown up around 5G. Some view it as the mythical Holy Grail which is supposed to be the answer to all of our generation’s worries. On the contrary, conspiracy theorists see it as a real Pandora’s box and a source of endless problems.

Extreme attitudes should be put right where they belong – between other fairytales. 5G technology really has a chance to revolutionise our daily lives, but it is just a tool similar to the previous generation standards implemented so far.

In a nutshell – the 5G network, as a successor to 4G, is expected to bring even faster Internet speed, lower latency, and greater stability of data transmission. It is thanks to this that our dreams of autonomous cars, the Internet of things, or artificial intelligence used on a large scale in medicine and engineering are slowly becoming a reality.

What is the current status of 5G deployment in Poland?

For several months now, mobile operators have been boasting in their marketing communication that their networks are 5G-ready. Two years passed from the first non-laboratory tests conducted by Orange (in 2018) to the first commercial 5G implementation by Plus (May 2020). Does this mean we can pop the champagne? Not necessarily.

Although the 5G project is still far from mature, we are slowly starting to notice the future of mobile networks shaping up. At the moment, operators only offer this type of service in some of the largest urban centres.

Notel Poland decided to check what stage the 5G implementation is currently at, and whether we can actually talk about wide access to 5G in certain areas. For this purpose, measurements were carried out in Warsaw, Łódź, and Wrocław on the basis of a drive test using the Xiaomi Mi 10 5G M20012J2G and Motorola Edge 5G XT2603 4 mobile devices, as well as the InfoVista equipment. Four domestic mobile operators were tested: Orange, T-Mobile, Play, and Plus.

During the drive test, measurements were made in two main categories. The indicators related to voice calls, namely the impact of the implementation of the 5G network on their quality, as well as the speed and quality of transmitted data, have been put under the microscope.

We present the most important findings of the prepared report below.

In the current implementation phase, it is impossible to use 5G directly to make voice calls. The lack of 5G SA (standalone) infrastructure or support from 5GC (core network) does not allow to launch the VoNR (voice calls in 5G technology) service. The situation is similar in the case of the availability of terminals supporting this service.

Therefore, in most cases, the VoLTE technology is used to enable voice calls.

Approximately 1,000 voice calls were made within the 5G-covered areas of each of the aforementioned operators. This made it possible to compare such parameters as Call Setup Time or Call Setup Success Rate.

Another key indicator is Voice Call Setup Time, i.e. the total time required to establish a circuit-switched call between users.

Find out more about the RFBENCHMARK methodology

Taking into account the voice call setup time, T-Mobile also ranked first (1,064 s). Orange came in second (1,329 s), while it took twice as long to set up the connection using the Play network (2,769 s). With a result of 6,214 s, Plus performed significantly worse than its competitors. The longer connection setup time in the Plus network is a result of the lack of VoLTE support for all mobile devices using the EN-DC functionality. As a result, most calls were made in the so-called “legacy” network in the CS fallback to 3G.

Quality and speed of 5G data transmission in Poland

As in the case of voice calls, the current state of the 5G infrastructure prevents it from reaching its full potential. We have to wait at least a few more months for the implementation of the mmWave 5G band (20-60 GHz).

The currently available 5G network signal is not classified as ultra-wideband.

In Poland, 5G usually operates using a lower band, often with dynamic spectrum sharing. The implementation of DSS technology allows to provide 5G services through the existing 4G networks – depending on the user’s needs.

Taking into account the radio access technology in the data transmission process, it can be observed that the usage level of 5G NR + LTE resources clearly differs between operators. Orange, T-Mobile, and Play use the FDD 2100 DSS band implementation with a width of 10 MHz. Plus, on the other hand, offers NR in the TDD 2600 (n41) band that is 40 MHz wide. Interestingly, Play does not seem to provide 5G services in Łódź.

For measuring the quality and speed of data transmission, a throughput indicator was used, which evaluates the amount of correctly transferred data within a given time period. The download and upload speed of FTP and HTTP files was calculated for two configurations –  the so-called FreeMode (i.e. the mode with active 5G NR and LTE) and the configuration with LTE-only usage.

The FreeMode (NR + LTE) configuration shows that with the current implementation of the NSA (non-standalone) architecture, it does not offer any improvement in service quality for an ordinary user. The average throughput is even lower than when using LTE only.

According to these observations, Orange has the best download throughput for large FTP and HTTP files in both FreeMode and LTE Lock configurations. In the case of FreeMode, this operator achieved a result of 61 Mbps, using only LTE with a speed of 75.7 Mbps.

Orange also took the lead when it comes to upload throughput for large FTP and HTTP files. However, while in the FreeMode configuration the operator had a clear advantage over its competitors (33.3 Mbps compared to 22.3 Mbps for Plus and 22.1 Mbps for Play), in the LTE Lock configuration the results were very close. Orange recorded a result of 24.3 Mbps, T-Mobile – 24.2 Mbps, and Plus – 23.9 Mbps.

An interesting statistic is the maximum throughput of the “downlink” application. In all the cities where the measurements were conducted, Plus achieved the best result – 376,7 Mbps in Wrocław, 406,3 Mbps in Warsaw, and 390,8 Mbps in Łódź.

When analysing the state of 5G in Poland, it is also worth looking at the data on downloading and uploading small files. This is a particularly important indicator from the point of view of mobile device users. It reflects the subscribers’ experiences when using 5G networks on their smartphones.

Orange can boast exceptional performance when downloading small files, regardless of the chosen configuration – NR+LTE (25.4 Mbps) or LTE-only (38.8 Mbps).

The graphs clearly show that the average upload throughput for small files is better for Orange (23.8 Mbps and 18.4 Mbps) and Plus (21.7 Mbps and 22.5 Mbps). These operators reported almost twice as good results compared to T-Mobile and Play.

This bears a significant resemblance to the current 4G standard which shows a similar trend.

Analyses related to the measurements based on narrowband 5G implementations, limited to 40 Mhz or sharing 10MHz with LTE (DSS), do not offer better results than the LTE technology.

In this context, Notel specialists posed an additional question about the possibilities offered by another popular 5G C-band. Due to the lack of commercial access to this band, analysts had to use 3 test locations in Warsaw, where the n78 80 MHz and 40 MHz bands were available.

In its report, the Notel company indicated that the nature of these tests should not be treated as a comparative analysis of operators. The aim is to show potential possibilities for the commercial use of the C-band after the Office of Electronic Communications auction planned for 2021.

A good average download bandwidth of Operator 1 is clearly visible. The result of 504.3 Mbps was only due to high usage of the NR configuration (80% NR + 20% LTE).

In terms of average upload throughput, the best result was recorded by Operator 2 (90.37 Mbps), which clearly outperformed its rivals. Operator 2 can also boast the highest maximum results with regard to downloading and uploading files – 602.6 Mbps and 117 Mbps, respectively.

Noticeable differences can also be observed in the latency measurements. The operator marked with number 1 outclassed its competitors with a result of 23.88 ms. For comparison, the remaining operators achieved results of 42.65 ms (Operator 2) and 45.8 ms (Operator 3).

5G deployment in Poland – summary of the current situation

Although mobile operators in Poland have taken the first steps to create the 5G infrastructure, there is definitely a long way to go to achieve a similar level of market penetration as 4G services.

A milestone for 2021 will certainly be the release of the C-Band which will help increase the efficiency of 5G services in Poland.

In the context of the ongoing infrastructure investments, it is also important to remember about the need to provide the market with equipment that will capture the potential of 5G technology. In this respect, there is still a significant disproportion between devices using LTE and 5G.

According to VentureBeat’s estimates, in the United States, 5G-enabled devices account for 14% of all smartphone sales. In Poland, this percentage is certainly even lower. Nevertheless, the recent launch of iPhone 12, which comes with 5G connectivity, may be a good prognosis.