What is the state of 5G deployment in Warsaw? – RFBENCHMARK Stationary Test report 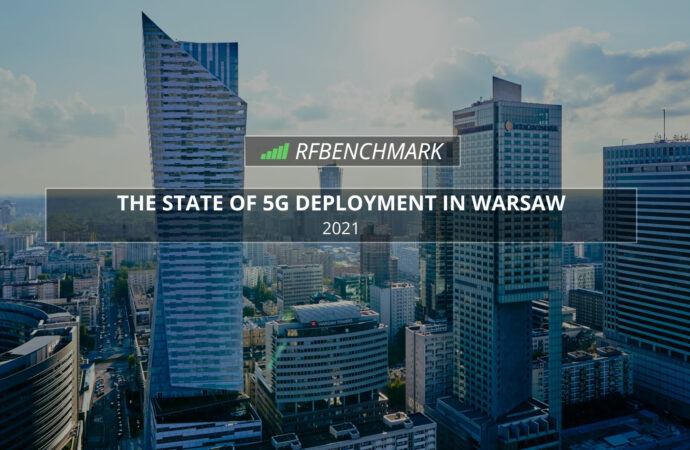 In many hard-to-reach places, where it is not possible to implement wired infrastructure, 4G technology is used as an equivalent of a fixed line broadband – with varying results. Now, with the advent of 5G technology, mobile Internet may finally become a convenient alternative to a wired connection, judging by the delivered Internet speed. Not only handset manufacturers, but also producers of systems that provide uninterrupted network access (such as Cradlepoint) already provide support for the latest technology. As the main network in mobile or temporary locations (cars, mobile points) or as a so-called “hot reserve” in case of failure of the classic “cable” connection.

Notel Poland experts decided to check the progress of 5G network development in Poland in terms of stationary users. This time, they focused their efforts on Warsaw, where they carried out measurements in stable radio conditions and in a motionless state (the so-called Stationary Test).

The following devices were used on board the measuring car: Xiaomi Mi 10 5G Pro M2007J3SG, Samsung S20 FE 5G, as well as PCTEL IBFlex and MXFlex scanners supporting 5G technology. The specification of this equipment ensures that the capabilities of the 5G network being implemented in Poland are fully tested. As a result, the collected data allows for an objective assessment of the current situation in the Polish capital.

The main focus was on downlink and uplink packet transmission, which is used e.g. for watching films in ultra-high resolution (4K, 8K), as well as making video calls using popular messengers, remote access to server systems or video monitoring, or browsing web content.

Notel experts randomly selected 8 locations in Warsaw where measurements of mobile Internet speed (data upload and download) in stationary mode were carried out.

In stable radio conditions, download speeds achieved in 5G technology (NSA) for individual operators are satisfactory, and for one even highly satisfactory. Plus mobile operator clearly stands out in this category, recording an average data download speed around 322 Mbps in all locations – over 200 Mbps more than the competitors. Next in line are T-Mobile (134 Mbps), Orange (109.6 Mbps), and Play (78.8 Mbps).

In the case of data upload, the speeds are correspondingly lower. Orange was the fastest with an average speed of 50 Mbps, followed by Play (48.2 Mbps) and Plus (42.8 Mbps). T-Mobile reported a speed of 23.8 Mbps.

The drive test measurement results show that at the moment, operators are focusing on increasing the range of the currently used 5G NSA (Non-Standalone) in Poland.

We are still waiting for access to the C-Band spectrum, which would offer each operator bandwidth of 80 MHz. Unfortunately, the auction has been delayed and its resumption is not planned by the Office of Electronic Communications until the third quarter of 2021.

But the potential of 5G technology, also in the case of fixed broadband, is already well demonstrated by the average results recorded by Plus, with a download speed of 320 Mbps! The results were obtained in 5G NSA from a single n41(n38) carrier with a bandwidth of 40MHz. In conjunction with the expected 80 MHz of C-Band spectrum and 5G CA (Carrier Aggregation), we can talk about a turning point of ultra-fast 5G Internet, also as a viable alternative to fibre optic connection in mobile or hard-to-reach locations.

And so the 5G revolution continues.

P.S. In the near future, we plan to take another Polish city under the 5G microscope. Stay tuned!